Accumulating greenhouse gases are causing the climate system of the Earth to move into states that have not been observed in historic time.  Computer models of the global atmosphere and ocean are able to simulate these new climate states, but the “pixel” size of these models is large compared to islands.  To project local future climate states of our small islands with their steep topography, which strongly affects our climate, special techniques are used to “downscale” these global models.  Two approaches have been used in Hawai’i to date, each with strengths and weaknesses. 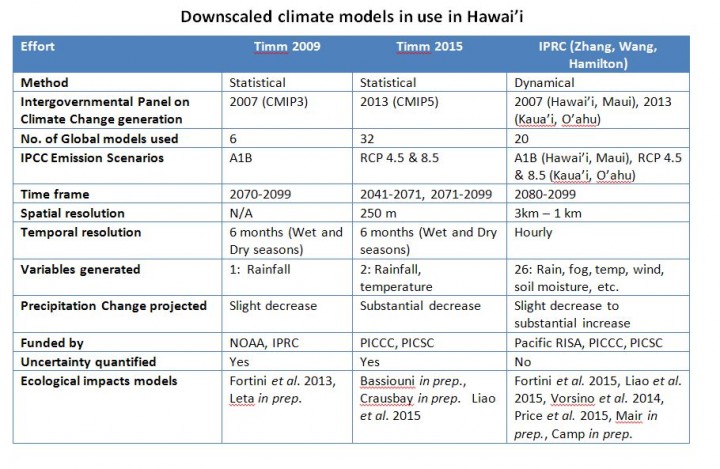 Because climate affects virtually all aspects of ecosystems, these downscaled models are essential in planning for climate impacts to conservation efforts and biocultural resources.  Intermediate or “impact” models use the downscaled climate projections as inputs to generate potential future stream flows, groundwater recharge, forest extent, and plant and animal distributions.  It is these models, rather than climate models per se, that are of most use to conservation managers.  However, because all models are approximations and contain assumptions and sources of uncertainty, proper use of these projections requires a degree of caution and an informed awareness of their limitations.

Mair, A., Bassiouni, M., and A. Johnson.  In preparation.  Groundwater Recharge on Maui: Assessing the Effects of Climate, Land-Use, and Land-Cover Change.  Project funded by Pacific RISA.